Foo Fighters ft. Shane Hawkins Perform “My Hero”. This gave me such chills. Can’t imagine what he must be feeling during this. Great job. I’m so sorry for the loss of your father. So much talent, passion and composure for a 16 year old on what must have been such an emotional occasion. Shane did his father proud!

Nothing to say …….freaking bad ass !!!!!!!! He needs to take his dad’s spot in foo !!! Do his education on the road like Wolfgang van Halen did …that kid is music. I suspect the natural urge will be to be protective of him. Foos could take a 2 year hiatus and then have him offically join at 18 years old and maybe with a new album.

His grin of thrill and pride, the blush on his cheeks as he was pounding and crashing on his Dad’s drums, the visible sorrow on everyone’s face at the song’s end- this was a touching, epic Rock baptism. You can literally see Shane go through every emotion while playing the drums. He’s legendary just like his father.

Little homie throwin’ straight rage on that stage, doin’ his poppa proud. He has my vote for new FF drummer, without a doubt. This made me cry. The emotion that Shane put into smashing those drums was chilling and so very beautiful at the same time  losing a parent is incredibly difficult.

Shane absolutely stole the show last night. I’d say it has to be up there alongside Queen at Live Aid as one of the greatest live performances of all time, especially when you consider everything – he’s only 16, he lost his dad suddenly a few months ago, never had any major experience playing live,

then he’s suddenly thrust into the spotlight, playing for one of the most popular bands in the last few years at Wembley Stadium, in front of 90,000+. You can see he absolutely put his heart and soul into that performance and was thinking about his dad. I’m sure he’d have been so proud.

This is absolutely heartbreaking. He looks so much like his dad.For him to get up and play to a huge crowd and do so well is amazing. 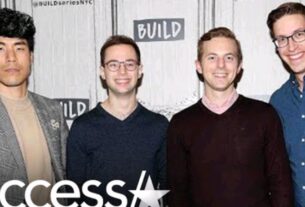 Ned Fulmer OUSTED From The Try Guys After Workplace Affair